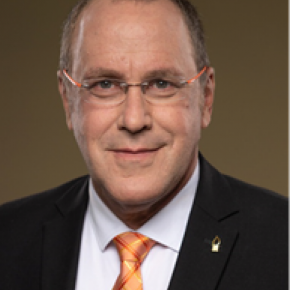 Prof. Daniel Chamovitz is the 7th President of Ben-Gurion University of the Negev. Previously he was a professor at Tel Aviv University, where he served as Dean of the George S. Wise Faculty of Life Sciences, and founder of the Program in Food Safety and Security.
Chamovitz grew up in Aliquippa, PA and studied at both Columbia University and the Hebrew University of Jerusalem, where he received his Ph.D. in Genetics. He carried out postdoctoral research at Yale University under fellowships from the European Molecular Biology Organization and the Human Frontiers Science Research Program. He returned to Israel on the prestigious Alon Fellowship by the Council for Higher Education in Israel for outstanding young researchers. Chamovitz has also held positions as a visiting scientist at the Fred Hutchinson Cancer Research Center in Seattle, and a visiting Professor at Peking Univresity. His scientific career has been characterized by novel and field-defining research on plant biology, biochemistry, developmental biology and systems biology. He has published numerous peer-reviewed research articles, and is on the editorial boards of several scientific journals.
Chamovitz is a sought-after speaker and science commentator. He has lectured worldwide on issues of global food security. His 2012 book What a Plant Knows has been translated into 19 languages, and was featured in the world press and media.