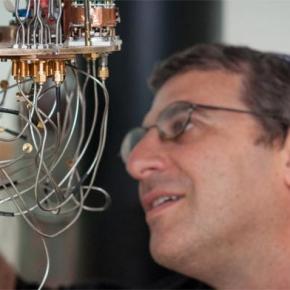 Nadav Katz was raised in the Galilee town of Karmiel, studied for his B.Sc. in Physics and Computer Science at the Technion and Hebrew University. He then carried out his PhD (direct) in experimental laser cooling and trapping in the group of Nir Davidson (Weizmann Institute, 1999-2005), measuring excitations in ultra-cold Rubidium Bose-Einstein condensates. In 2005-2007 he carried out his postdoctoral research in John Martinis' group (UCSB) on Josephson superconducting quantum circuits. He then started the Quantum Coherence Lab in 2008 at HUJI and has been there since. Nadav is the founder and director of the HUJI Quantum Information Science Center (est. 2011) and the Quantum Community Network (QCN) representative for Israel with the European Union. Nadav's research focuses on the study of decoherence mechanisms within superconducting circuits, including spectroscopy of surface defect states and control and readout protocols for enhancing quantum sensing protocols. In recent years he has developed within his group a novel material platform for microwave photonics on a chip. Nadav is married with four children and lives in Jerusalem.