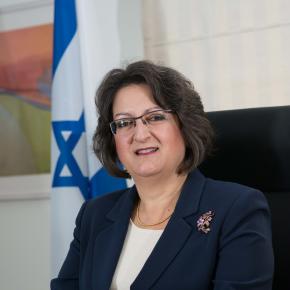 Deputy Director General, Head of Economic Affairs Division, Ministry of Foreign Affairs (November 2017 - )
She joined the Israeli Ministry of Foreign Affairs (MFA) in 1988, served as Consul in Sao-Paulo, Brazil (1992-1996), as Consul General to the Southwest of the USA, in Houston, Texas (2002-2005), and as Ambassador of the State of Israel to the Republic of Cyprus (2015-2017).
In the Ministry in Jerusalem, Yael chaired the Israeli Media department, serving as the Ministry's spokesperson to the Israeli media. In 2008-2015, she served as Head of Bureau for Middle East Economic Affairs at the MFA. In this capacity she has been involved with the advancement of Israel economic relations with Middle East countries.
She was in charge of Women's Status and gender equality at the MFA (2006-2009) and as the Ministry representative to the Consulting Committee of the Authority for the Advancement of Status of Women in the Prime Minister's Office.
She was elected chairperson of the workers committee of the Israeli diplomatic service, advocating for excellence in the diplomatic service.
During her diplomatic career, Yael won several awards of excellence.
Holder of MA degree cum laude from Hebrew University in Geography and Urban Studies and a BA degree from Hebrew University in Geography, Sociology and Anthropology.