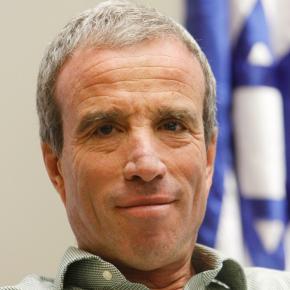 Elazar Stern was born in 1956. He is married to Dorit and is the father of five, grandfather to 13 and lives in MitzpeHoshaya, a town he helped create in 1980.He holds a bachelor’s degree in Land of Israel Studies and Economics from Bar-Ilan University, a master’s degreein Business Administration from Tel Aviv University, and a master's degree in Strategic Resource Management from the National Defense University in Washington, D.C. In 1974, Stern enlisted in the IDF and volunteered with the Paratroopers Brigade, where he held a series of command positions. In 1987, he was released from military service and became a teacher in Makif Sharett High School in NofHaGalil. Several years later, Stern re-enlisted in the IDF for career service and continued to fill command positions in the field units: deputy commander of a territorial brigade, brigade commander, commander of the IDF Officers Training School (Bahad 1), and commander of an armored division (reserves). Stern is a major general (res.) in the IDF, and he served as Head of the Human Resources Directorate, commander of the IDF Officers Training School, and Chief Education Officer, as well as a combat soldier and commander in the Paratroopers Brigade. As head of the Human Resources Directorate, Stern led the IDF's efforts to increase engagement in Jewish and democratic education. He initiated and established the Nativ conversion project, through which more than 12,000 people from the former Soviet Union have converted; he promoted and fostered the absorption of immigrants in the IDF; he strengthened the IDF’s ties with the Diaspora Jewry; and he set up the Machtzavim program for the development of Jewish and democratic educational leadership skills among senior IDF officers and members of the various security services. He was also among those who spearheaded the project to introduce bone marrow transplant match testing to the IDF enlistment procedure, an effort that has saved more than 2,400 lives to date. Stern spearheaded and carried out the Edimb’Madim (Witnesses in Uniform) project, and he headed a special committee that reformulated the IDF Code of Ethics. He was released from the IDF in 2009. In 2009, he published a book that was later translated into English as ‘Struggling over Israel’s Soul: An IDF General Speaks of His Controversial Moral Decisions’. From 2010 until his entry into the Knesset in 2012, Stern served as the volunteer chairman of the Foundation for the Benefit of Holocaust Victims in Israel. From 2011 to 2012, he chaired the Ethiopian National Project (ENP). He was also a member of the board of directors of the Habima Theatre. Stern first became a Member of Knesset in 2013 with the Hatnuah Party and joined the Yesh Atid Party in 2015. During his tenure in the Knesset, amongst other activities, Stern spearheaded the parliamentary efforts to address issues of religion and state and the Jewish and democratic discourse in the Knesset. He sponsored the Conversion Law (Temporary Order), 5774-2014; the Shabbat and Jewish Holidays Law, 5775-2014; and the Authorization to Provide Supervision and Regulation over Kashrut Services Law, 5774-2014. He chaired the Religion and State Caucus, the Caucus for Ethiopian Immigrant Soldiers, and the Parliamentary Caucus for Holocaust Survivors, through which he fought to expand the resources provided to Holocaust survivors in Israel. He also chaired the Caucus for the Promotion of Israeli Music. In 2021, Stern was appointed Minister of Intelligence.