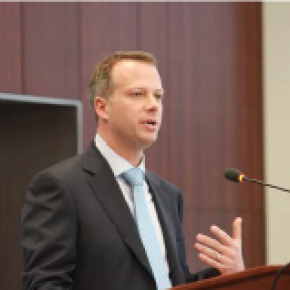 Thomas McDermott is the Acting Assistant Secretary for Cyber, Infrastructure, Risk and Resilience Policy at the U.S. Department of Homeland Security (DHS). He advises senior department officials and oversees the development of policy positions related to the full range of cyber, technology, infrastructure, risk and resilience issues. In his longstanding role as Deputy Assistant Secretary for Cyber Policy, Mr. McDermott has advised senior DHS and White House officials in connection with numerous departmental and Administration priorities, including the Cyberspace Solarium Commission; the 2018 National Cyber Strategy; and the development and implementation of executive orders by successive Administrations to strengthen supply chain security, improve federal acquisition, increase information sharing, and enhance the security and resilience of critical infrastructure against physical and cyber threats. He spearheaded the development and implementation of the first DHS-wide Cybersecurity and Artificial Intelligence Strategies and represents the Department on diverse issues including election security, data security and encryption policy, emerging technology, climate change, and other evolving risks to the Homeland. In 2012, he received the DHS General Counsel’s Excellence Award for his leadership in the development of the Obama Administration’s comprehensive cybersecurity legislative proposal. He has also advised on the development of major DHS cybersecurity programs and provided operational legal support to the predecessor organization of the Cybersecurity and Infrastructure Security Agency. Mr. McDermott has served in a variety of roles at DHS, including an assignment as Deputy Director for Strategy at the National Cybersecurity and Communication Integrations Center (NCCIC), Acting Deputy Associate General Counsel, and Assistant General Counsel for Infrastructure Programs. Mr. McDermott was also previously an attorney in the DHS Office of the General Counsel’s Legal Counsel division and acted as the Assistant General Counsel for Strategic Oversight and Review. Prior to joining DHS in March 2007, Mr. McDermott was an attorney at Kirkland & Ellis LLP’s Washington office where he focused on matters involving complex and commercial litigation. Mr. McDermott graduated from the Duke University School of Law and the University of Notre Dame, and clerked for the United States Court of Appeals for the 11th Circuit.