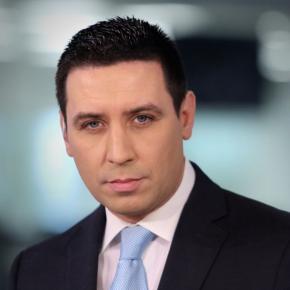 Ynet is Israel's biggest and most influential news site. More than 1.5 million unique users are reading and watching ynet every single day. The site works 24/7 and covers everything from Israel to the world scene.
Attila Somfalvi is the lead anchor of Ynet News, a political commentator, and commentator on the Jewish world.

Since 2001, he served as a police correspondent during the second Intifada, and later as a diplomatic reporter and political reporter, and analyst for more than 12 years.

He now serves as the main host of television broadcasts on the Ynet news site and as a senior commentator. He is the editor and presenter of Ynet’s podcast, “The Headline” and publishes a personal political podcast, “The Barricade”. Somfalvi is co-hosting a radio show on Radio 90FM in Israel.

Somfalvi was also a visiting scholar at the Institute for National Security Studies (INSS) and took part in an innovative study on “fake news” and the impact of the phenomenon on Israeli democracy. He lectures on political communication and politics in various forums and in educational frameworks. B’nai B’rith has announced earlier this year that a certificate of merit in memory of Luis and Trudi Schydlowsky will be conferred on Attila Somfalvi for a series of reports and commentaries on the relationship between Israel and American Jewry.

During his military service, he served as a reporter for the "Bamahane" newspaper, covering IDF forces in Lebanon and Judea, and Samaria.

He is married, has  two sons, and lives in Tel Aviv