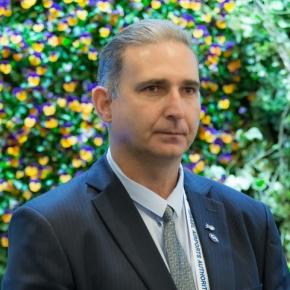 Roni Tidhar is serving for the past 5 years as the Israel Airports Authority’s (IAA) Head of International Consulting Services - Business Branch. He holds as well the position of (acting) IAA Head of Cyber Security.

He has more than 30 years’ experience of civil aviation security and emergency management gained primarily in Israel's Ben-Gurion International Airport’s Security Division, where he held multiple field command positions and was a director of several units and departments. Roni also served as an El Al Israel Airlines' sky marshal, as well as an operational flight security manager, working in dozens of airports across the globe. Since being asked to establish his current position, Roni has lead IAA's teams in aviation security consultancy, providing services to different stakeholders and clients within aviation industry (airports, airlines, and regulators).

Roni has vast technical knowhow regarding airport operations and security; he is a prominent specialist in multi-layered security and was actively involved in numerous emergency events – covering most known severe scenarios. He led many large-scale integrated drills and exercises, conducted training courses, drafted procedures, and constructed security arrays. He developed unique perspectives from working 'shoulder to shoulder' with governmental institutions, law enforcement agencies, and a wide range of different local and international stakeholders. He used to serve as workers union representative.

His personal operational qualifications include his 38 years of service in the army (IDF – both regular and reserve units), which afforded him a broad-range of emergency-related experience as both a field and combat commander during many conflicts. During his military career, Roni led his armoured battalion in combat, was sent on life-saving overseas assignments, and he served as a home-front brigade commander (Colonel) responsible for a large portion of Israel's civil urban/rural communities’ preparedness and resilience.

He has been a keynote speaker at international conferences and has contributed to several worldwide industry publications, mainly on aviation security and homeland security subjects.

Roni acquired his B.A. in Political Sciences & Far East Studies from Jerusalem’s Hebrew University and his M.A. in Security & Diplomacy for Directors from Tel Aviv University.

In his spare time, Roni volunteers as a Police Squad Commander, serves as public representative in his local community, as well as on the board of directors of three NGO's (for army veterans).